Last week I promised you I was gonna dish.  So here's the deal.  Not everyone is self-actualized... many artists I know are thin-skinned... Do we allow people's words to affect us, even though we know we shouldn't?  There was an incident a few months back where I posted an image on social media of some pendants that were made using a technique that, while not requiring a lot of skill, can still produce some nice results and turns out a ton of people are interested in it.

Everything was going great until one person decided to go off on a tirade about how "it's not art!".  Well, dude, first of all, I never SAID it was art.  I said, "Hey guys, here's the results of some of my experiments with blah-blah-blah technique."  And sometimes just knowing how to do something can LEAD to art as the interested party learns the technique and takes it in their own direction. And this is a great example.  The technique in question was using purchased water-slide decals and firing them onto enamel.  After learning how to do that, I now create my own drawings and turn them into my own decals.  But I *started out* by using purchased decals first.  Sometimes babysteps are involved.  Secondly, why are you being so condescending?  Alas, in my non-confrontational way, of course I said none of that aloud... I basically just ignored him.  But my post (and all the "oohs" and "ahs" for my post), must have really pushed one of his buttons because he continued... on and on ... and on and on and on.  Comment after comment about what art is and isn't and how what I was showing is a sham, etc.  And as if commenting ad nauseam on MY post wasn't enough, he went on to start two or three of his own threads informing the public what art is and isn't.  One creation might take more work and/or skill than another creation, but there is no cause to ever bash someone's efforts in public.  And as I've said, sometimes what we do is the beginning of a learned skill and we know full well we have a ways to go to work on that particular technique.

Also, no one can tell me what art is and isn't.  Art can't actually be defined because it's subjective... like "love".  I was reading an article the other day on the exploration of the meaning of art which described art this way: "Art is often considered the process or product of deliberately arranging elements in a way that appeals to the senses or emotions."  I won't disagree.  I don't see anything in there about "Oh, you can't use THIS item or THIS technique, 'cause those aren't art!"

The article continues with: "The meaning of art is explored in a branch of philosophy known as aesthetics."  I could go on but won't because there are billions of articles on the subject of the definition of art.

Anyway, my second point is, to me, much more serious and relevant.  What did this person's negative comments do to all the budding jewelry artists who may be currently exploring that technique or other equally less-challenging techniques?  Unfortunately, I know one of the effects for sure because I heard from more than a few members of that Facebook Group who said after reading that no way were they going to post any of their own work.  Oh my gosh, this destroys my soul.

I know some people believe that if a person is really serious about their work, they won't be swayed by negativity that comes their way.  But this is the real world and not everyone is so self-actualized that they can carry on confidently in the face of vitriol.

I think you get my point so now I need to switch gears and tell you about the opposite... the nurturers.  There are people who encourage, inspire, and assist others.  There are people who seem to just naturally be supportive.  I admire these people because I know first hand the effect it can have on someone's art.  Again, should it?  Probably not, but the reality is that it most often does.  I am not a duck and water doesn't just flow off my back.  Artists are generally passionate and emotional people, and most of the ones I know do let their environment affect them from time to time.

So I'd like to give a big shoutout to two people who I admire for being, not only at the top of their respective fields in jewelry making, but two great examples of supportive, inspiring artists.  I've never seen either one of these artists talk down to anyone, disparage anyone's work, or just be negative or condescending in the slightest.  There are many, many artists like this, but these two are people I've had interactions with in such a way that I was really touched by how NOT condescending they were.  And if anyone would have the right to be condescending it would be someone at the top of their game.  Instead, they reach out to everyone equally and treat others with respect.

So thank you Jill Tower and Pam East for being great examples of what a strong artist can do for the up-and-coming artists.  (You should click on their links because their talent is amazing!)

And now for the mundane stuff.  :-)  We're in week five now of my new year's resolution to create 10 pieces of jewelry each week.  Some were fun experiments that took me all day.  Others were... not.

The first piece I made was my third attempt at cloisonne and since I messed up the silver even before I started the enamel portion of the project, I knew I was keeping this one for myself. 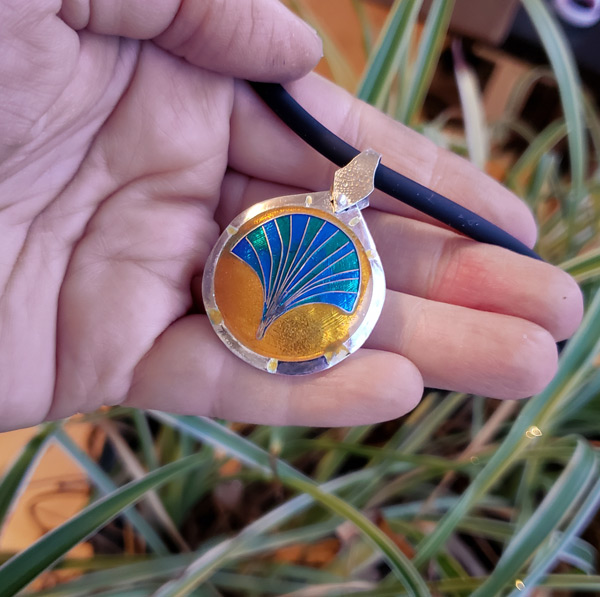 After that, I made three more prong-set Jasper heart pendants, similar to but each slightly different from the one I made last week. 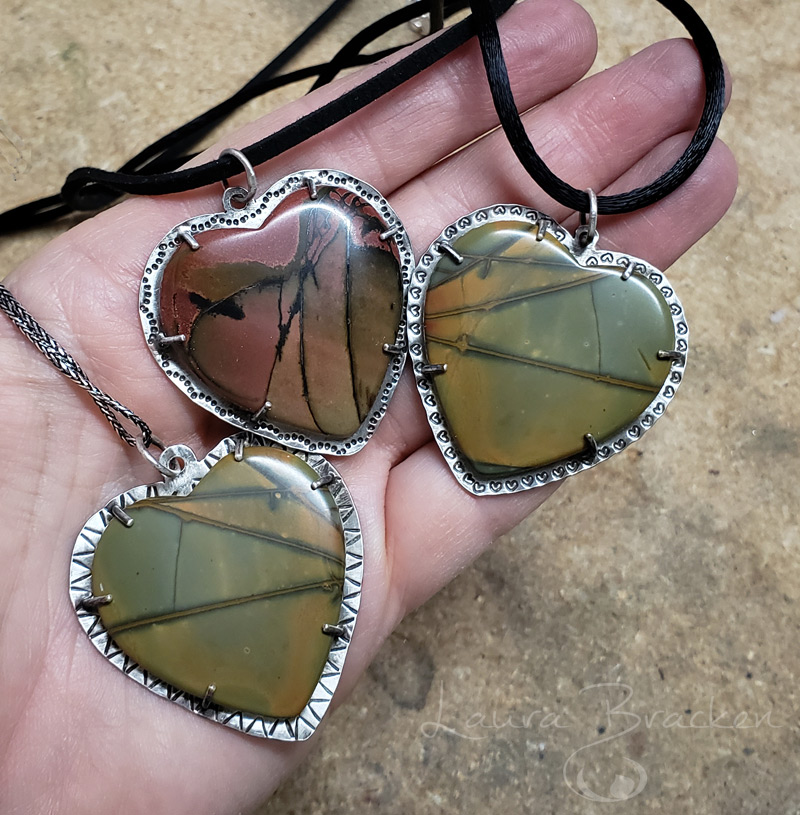 I made two cloisonne heart pendants... 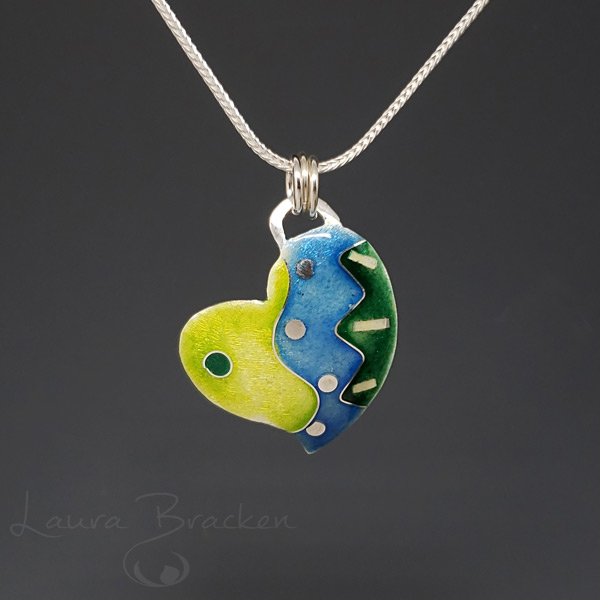 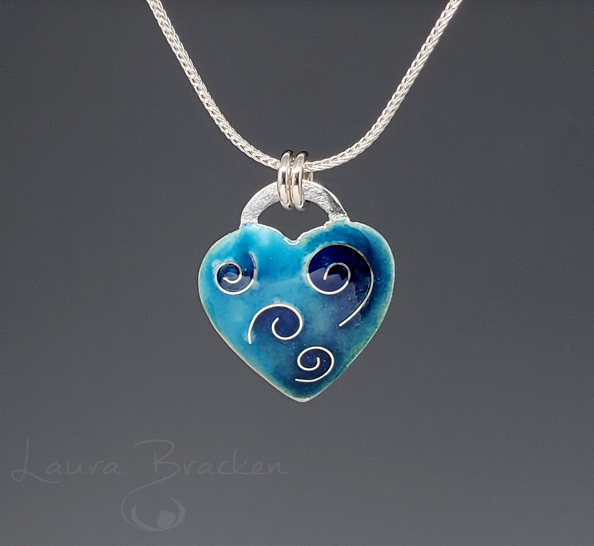 Then I made a two pair of hammer textured sterling silver heart earrings (very lightweight). 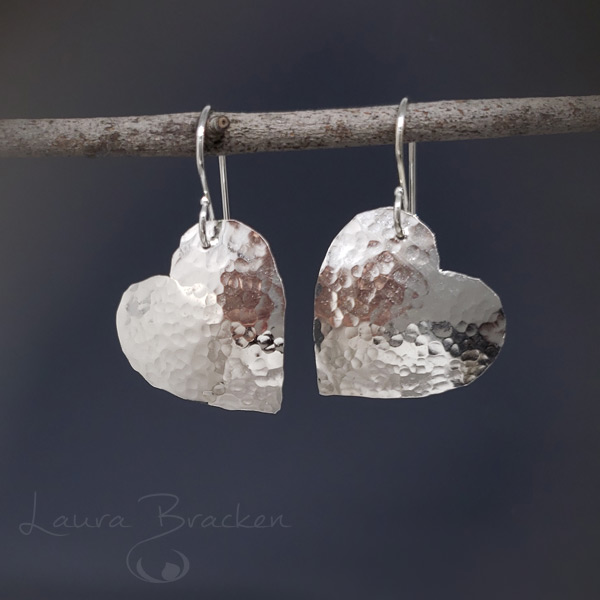 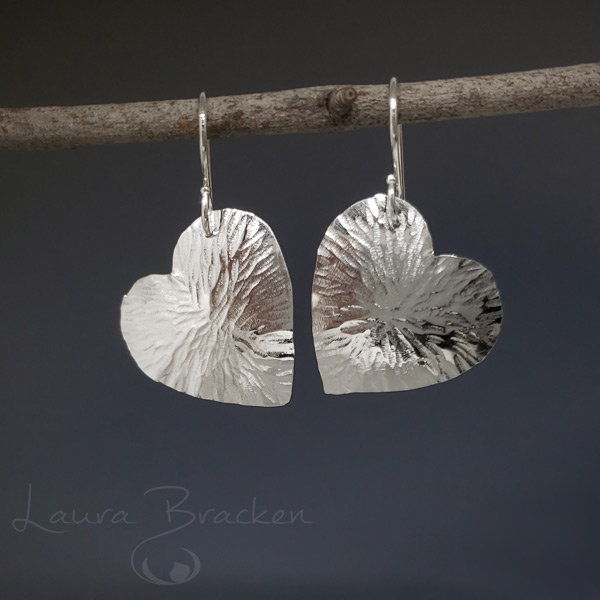 And finally I made two double-sided heart pendants using the rolling mill.  One I took to the Auburn gallery, the other I donated to the High Hand gallery for a raffle there this Sunday. 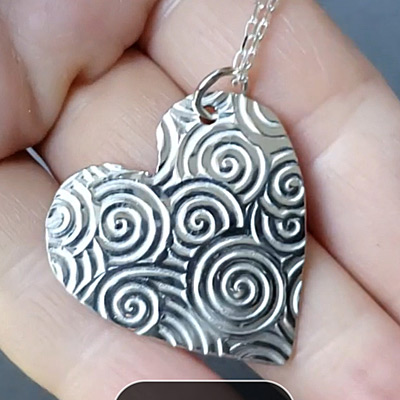 Did I mention tomorrow I start a four-day workshop at Metal Arts Academy in Auburn?  I'm taking a class on filigree taught by Valentina Caprini.  Very excited... a little nervous (but that's just because I'm the nervous type).

Okay, see you all next week!